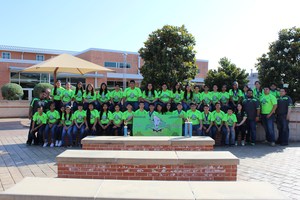 The 2015-2016 school year marks another great season for The Mighty Mission ROBO-RANGERS. This year the team advanced 8 teams to the Texas Computer Education Association (TCEA) State Robotics Championship held in Hutto, TX on April 30, 2016.
(Click on Title for Full Story)

At the TCEA Area 1 Robotics contest, the Mighty Mission ROBO-RANGERS swept the entire competition in all categories for the second year in a row and remained Area 1 Champions. The ROBO-RANGER teams from Alton Memorial Jr. High and Mission High School were the only schools to take a team of forty students and have 2 teams of students competing in each of the four categories at the state contest. The TCEA State Robotics competition brings together the Top 60 teams for each category in the state of Texas in Advance Arena and Intermediate Arena contests. It also brings the Top 40 teams in the Advanced Inventions and Intermediate Inventions for the opportunity to compete. All teams competing at the TCEA State Robotics Championship qualify for the opportunity to compete by placing in the Top 2 of every category or are invited as wildcard to the competition.

From the other 6 teams that competed throughout the day, the team had two Top 5 teams in different categories. The MHS Maroon ROBO-RANGERS team led by Captain Nancy Olvera, Carlos Hernandez, Kysela Garcia, and Ricky Yruegas finished 5th in the state in the Advanced Arena category. This division was the toughest because all the Top 10 teams in the state were hitting perfect scores. In the Intermediate Arena, our second Top 5 team was the AMJH Green ROBO-RANGERS team led by Captain Robert Ramirez, Sebastian Ortiz, Matthew Perez, and Nathaly Ramirez. The MHS Emerald ROBO-RANGERS finished 7th in the state in the Advanced Inventions category. The team was led by Captain Isla Coronado, Kristian Gabby Reyna, Priscilla Quintero, Vanessa Quintero. The difference of 2.4 points was the deciding factor from coming home with more medals. The other remaining teams placed in the Top 30. Including Pink Robo-Rangers who placed 18th and were led by Captain Adamaris Sanchez, Ryan Palacios, Agustin Sanchez, and Vanessa Gamboa. Purple Robo-Rangers led by Captain Keyla Trejo, Kimberly Maldonado, Gabriela Martinez, and Diana Trejo who place 21st place & Titanium Robo-Rangers led by Captain Ashanti Vasquez, Michael Vasquez, Cristian Sanchez, and Erykah Rodriguez who placed 28th. Overall The Mighty ROBO-RANGERS had 5 teams place in the Top 10 at the TCEA State Robotics Championship in all four categories.

In the Invention contests, teams of two to four students create and develop a robotic invention to demonstrate a solution for a problem of their choice. This showcases research, robot performance, robot design, marketing, and presentation skills for a panel of judges. Students approach their problem as a real team of engineers working together to solve their problem using the engineering design process.

The Arena contest is a more prescribed problem contest. Teams of two to four students receive a set of challenge rules and specifications designed around a theme that varies from year to year. This year’s theme is “Power Up” and is designed around the theme of Energy and Power Storage.

Students had to design and innovate a robot using the EV3 and NXT platforms of Lego Mindstorms to accomplish a number of objectives. This entailed months of preparation, brainstorming, designing, and programming.

The challenge is designed around the theme of Energy and Power Storage entitled “Power UP” for 2015-2016 TCEA Arena Challenge. The team’s robot had to strategically be programmed to perform six tasks on the challenge field, autonomously. In “Power Up,” a team’s robot had to perform specific tasks on the challenge field. The EV3 Robot had to: manufacture Super Batteries, take Super Batteries to the Collection Area, Power Up by deploying a Lightning Rod, Recycle unused Battery Housings, Clean up the manufacturing test facility, and Three-Way Stop.

Results for the Advanced Arena teams from AMJH and MHS-

Results for the Advanced Inventions for AMJH and MHS-

Results for Intermediate Arena for AMJH-

Results for Intermediate Inventions for AMJH-

Pictured are the members of the Mighty Robo-Rangers after the recent TCEA State Robotics Championship held in Hutto, TX.