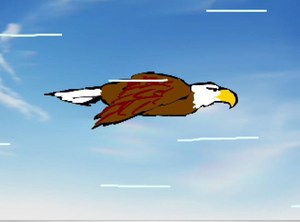 CTE Students of Mr. Pablo Salinas's Animation II class use both 3d and 2d animations to create an awesome 30 second clip.(click on the title and download the video!)
A tip of the hat to students Gustavo Castorena, Kevin Chang, and Jorge Esquivel for there excellent work creating the 30 second video. Using Maya to create and render a detailed 3D model of Tom Landry Stadium the team then key-framed virtual camera motion paths and animated a pan of the high resolution stadium. Also noted was the 2D animating whereby they drew and animated an eagle flying out of a football using Adobe After Affects . These two renders were imported into Final Cut Pro and synced to music and finally rendered as a single 30 second video. Mission High School's CTE program spent many thousands of dollars equipping the class with industry standard software used in 3D modeling and Video Production with the intent of providing students with the most up to date skill sets needed in today's competitive video industry. When Mr. Salinas was asked about the students work he stated it's 100 percent student created, and no templates were used. He also added the short 30 second video is just the beginning as his students are presently teaming up for  larger more involved animation sequences.