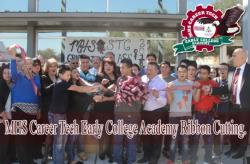 The two entities banded together to create western Hidalgo County’s first career tech early college high school, which consists of the diesel technology, precision manufacturing and welding. The link to the article is:
http://www.progresstimes.net/news/local-news/7080-welding-a-future-mcisd-opens-career-tech-academy.html

Like the gear in the Career Tech Academy logo, Mission High School and South Texas College are working as a machine to transmit knowledge to the students in the dual enrollment program.

There are only five institutions like it in Texas, and STC partnered with five other districts, but Mission CISD is the first to get its program off the ground, according to STC President Shirley Reed. The accomplishment was commemorated at the Feb. 26 ribbon cutting ceremony.

“We’re here more than anything to celebrate the opportunities for kids to get college credits, college opportunities and exposure to the college environment at the high school level,” MHS Principal Edilberto Flores said.

The 64 freshmen enrolled in the academy have the opportunity to graduate with 60 career-specific college credits, earning them an associate’s degree by the time they graduate from high school.

For Carlos Blanco, this is the first step to following his father’s path. The 14-year-old chose the diesel technician track, where he will learn the ins and outs of inspection, repair and overhaul of anything with a diesel engine.

Those enrolled in the academy are officially college students. They have to work off a college calendar and are well aware their grades create ripples in their future. But once they complete the program, their degrees can open up new doors for them, such as a future in engineering.

“I wanted to come here because there’s more opportunities for students like us,” Blanco said. “We’re at a very young age and have already gotten so far because of the fact that we’re already at STC. Rarely (do) freshmen in high school go to STC or are at an adult level.”

According to a 2013 U.S. Census study, Hispanics have consistently been underrepresented in STEM occupations – science, technology, engineering and mathematics. In 2011, Hispanics held 7 percent of jobs, while non-Hispanic whites held 71 percent of jobs in STEM.

The Career Tech students from Mission High are paving the way for students across the Rio Grande Valley, said Superintendent Ricardo Lopez.

“If you do well, it’s going to open opportunities for other people in the Rio Grande Valley,” Lopez said to the enrolled freshmen. “When you walk in these halls, you’re making history.”

President Reed said her only concern is that students were going to be poached by business before they get to graduate. At the ceremony, she asked the students to pledge that all 64 would graduate in 2018.

“Employers are going to find out that you already have your welding skills, diesel technology skills or have learned the basics of precision manufacturing and they’re going to want to recruit you. Don’t be tempted,” she said at the ceremony.

Academy Administrator Mary Aleman is already starting to visit junior highs to scout for next year’s cohort. Students in schools not zoned to MHS also have the opportunity to attend the Tech Academy.

Although the current cohort was recruited based mostly on student interest, Principal Flores said he anticipates more applications for the next year. A panel of individuals will determine those serious about the four-year program.

“This is not just a chance to be a part of an organization. You are enrolled at STC as a college student,” Flores said. “The kids here already know what they want to be. We are recruiting students that are going to be 100 percent committed to the program.”