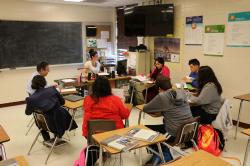 Half a dozen students at Mission High School are the first in Texas to fulfill their social studies requirements with a Mexican-American Studies course, while simultaneously earning college credit.
"These students are pioneers,” said course instructor, Trinidad Gonzales. “They’re breaking new ground for students to come after them in Mission, as well as other parts of the state.”

“Once you get those components together, it’s doable and I think Mission and STC (South Texas College) are showing how easy it is to do,” Gonzales said. “It’s definitely a blueprint for other high schools around the state.”

According to Gonzales, the collaboration was partially a response to Texas legislation, State Bill 5, which required high school graduates to take four years of social studies. Taking advantage of a special topic designation, the subject matter runs parallel to 2327 and 2328 Mexican-American History courses taught at South Texas College.

Because of the small class size, Gonzales and Rojas, whose instruction is coordinated and complementary, are able to incorporate more of a conversational approach to the material.

“It’s a pretty intimate setting, and (Gonzales) uses more of the Socratic method when it comes to his lectures, unlike his other college classes,” Rojas said. “There’s a lot more discussion and participation.”

Rojas was partially motivated to develop the class in this subject matter based on her personal academic interests. In high school, she was not afforded the opportunity to learn about her heritage, a topic she attached herself to at university.

“When I got to college and was exposed to (it), I became very passionate about it,” said Rojas, who studied history as an undergrad. She is currently a master’s student at the University of Texas-Pan American in the same subject.

Rojas attended a Rio Grande Valley Coalition for Border Studies and Mexican American Studies meeting, which consisted of teachers, professors and students from all about the RGV, Rojas said.

Their objective was to go back to their schools and seek permission to start cultural courses. MHS green lit the special topic, and the class was created right before last May.

“Instead of the English lens as the center point, we (look) through the Spanish lens. If you actually look at a map of the United States, Spanish influence is from the east coast to the west coast,” Gonzales said. “When you focus on a class like this, from the Spanish lens, then you start to realize the significance Spain, and later the Republic of Mexico, had on the social, economic and political development of what we consider the United States today. It certainly gives a more well-rounded perspective.”

Gonzales referred to the recent UT-RGV Vaquero mascot pushback as an example of citizens not understanding the long history that Spain has had in the United States.

“Vaquero is simply the Spanish word for cowboy,” he said. “A lot of things we take for granted, that is considered American, is actually either Spanish or Mexican in origin.”

Spanish influence was not limited to vocabulary, but to fundamental ideas on which the state of Texas was founded, he said.

“It shouldn’t be surprising that we have Ma (Miriam) Ferguson as the governor of Texas, a female, in the (20s and) 30s,” Gonzales said. “These are important topics that get ignored if you simply try to understand the history of the United States through an English lens only.”

The Spanish even played a pivotal role in the United States success during the American Revolution, he said.

“If it wasn’t for the Spanish, taking control of the Gulf Coast area and the Mississippi River, the English might have been (more) successful, militarily, in the South,” Gonzales said.

With control of the key supply route, the Mississippi River, the Spanish complicated the British forces’ southern campaign, he said.

He didn’t stop at crediting the Spanish and French’s military intervention for their roles in the American Revolution, but acknowledged the local contribution in money and material goods towards the Revolution.

“In this area, the Spanish citizen from Matamoros, Reynosa, Laredo, Camargo (and) Guerrero Viejo (sent) meats, donkeys and money to George Washington to help in his effort against the English,” Gonzales said. “There are many people in this area that can become part of the Daughters of the American Revolution because their ancestors helped supply the Rebel forces.”

Spring’s curriculum will feature even more local history, including that of Mission, with Gonzales requiring students to interview Chicano and Chicana artists.

“It’s an important part of the history, not just of this community, but of art movements within the United States,” Gonzales said. “I want to tie local history in relation to national history, and talk about the connections. It’s not like the Valley is some backwater, isolated location; the Valley has actually been a very significant part of United States history, particularly when we look at Civil Rights.”

Celebrating the Rio Grande Valley’s past was a something Mission High’s administration considered before giving the okay.

“We need to expose our students to the richness of our culture,” said Mission High School principal Edilberto Flores, who studied history in college. “Why not do it with an opportunity to receive college credit, too?”

The school is currently investigating other potential topics to further expand their course coverage as per students’ interest, Flores said.

“We have students saying, ‘If I take this class as a junior, what are you going to offer me as a senior?’” Flores said. “That puts us on guard, and having to be creative.”

Rojas hopes the students will be able to attend the National Association for Chicano and Chicana Studies conference in February.

“It’s an awesome opportunity for any college student to present at the conference, and I think it’s even more impressive for these high school seniors to be able to participate in a type of academic event like this,” Rojas said.